One Night
Charles Choi is a minor character in Lookism. He is Crystal's father and the CEO of HNH group, a conglomerate company that own many smaller businesses. He one of the few people that know about Daniel and Crystal's secret.

He is a tall middle-aged man with a dark aura and squinted eyes that make him seem cynical. He has a mauve hue to his stylized haircut and has a full white designer stubble beard that surrounds his lips and cover his cheekbones. He wears expensive clothes that show his wealth and is referenced to have a missing left arm. However, the reason being has yet to come to light.

He exerts an air of authority as he was able to silence anyone simply by walking through the room. He seems to be extremely shrewd.

According to Crystal, Charles is raising ten children, referred to as the "ten geniuses", alongside her. Each of these children were chosen for their unique skills and are being groomed to be successful in their respective fields. Of these children are Gun, Goo, Kouji, Crystal, DG, Tom Lee and Eugene.

He is Crystal's father, and is the only person who knows the fact that she has two bodies. He's also ordered Crystal to keep an eye on Daniel, presumably because he doesn't want him to mess up and reveal his secret.

In Chapter 108, DG stands up for Charles, saying that Charles had been the one who had taken care of him ever since he was young. Charles also makes him the CEO of PTJ Entertainment.

Charles met Gun while working in juvenile prison. He hired him for his fighting prowess. Later on, he hired Gun to be Crystal's bodyguard.

Several years prior to the series, Charles sent Gun to test Goo to see if he had potential to become Gun's partner. He later hired him to be his bodyguard. Currently, he is suspicious that Goo is collaborating with Workers in an effort to take him down.

After Daniel (old body) is lead back to his own house after investigating the true identity of his new body, Charles is seen waiting for Daniel at his house. He begins to attack Daniel who is easily defeated, and says to him that James Lee doesn't exist, and that it was all fabricated to keep his secret safe. Then, after Daniel asks to know why he has the new body, he says that he would have to surpass DG.

He and Steve are both CEOs, and they have known each other for a long time, but are not friends.[1] 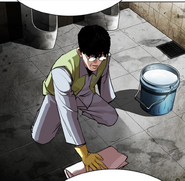 Choi as a janitor

Community content is available under CC-BY-SA unless otherwise noted.
Advertisement